MacGregor Black founder and Managing Director Jon McNeish shares his views on Tesco’s run in the last five years, Dave Lewis and how the business has turned around.

They like their nicknames in the business world – from Warren Buffet’s benign `Sage of Omaha’ to the less cuddly `Fred the Shred’ for the former head of RBS.

Now supermarket giant Tesco’s chief executive Dave Lewis, who, when he was brought in to restore the group’s fortunes, was known as Drastic Dave, can also claim the title of Mr Fixit.

It’s not hard to see why.

When he took the reins in 2014, Tesco could only be described as beleaguered. It reported the worst results in its history with a record pre-tax loss of £6.4bn and was suffering from a loss of focus, declining sales and overambitious expansion. And, if that wasn’t enough, it was also hit by an accounting scandal and a £250m fine for overstating its profits.

But, fast forward to 2019, Tesco’s centenary year, and the picture is different.

Last month, the grocer reported a 34% rise in operating profit to £2.21bn for the year ended February 23 – ahead of market expectation and up from £1.64bn in the previous period.

This is particularly impressive, given the background against which it has all been achieved. Apart from intense competition from German discounters Aldi and Lidl, consumer confidence has been hit by Brexit, and the fall in the pound since the referendum has increased the cost of imported food, driving up costs for retailers and prices for consumers. 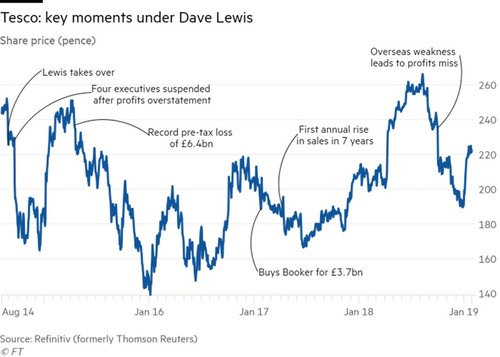 So, how did Drastic Dave manage it?

The first element of his turnaround plan was old-fashioned cost-cutting and debt reduction. The South
Korean business Homeplus was sold for £4.2bn, along with other assets and focus was switched to reviving the UK grocery division.

There have also been big job losses. In January Tesco announced that up to 9,000 positions were at risk across its head office and stores as part of a major cost-cutting drive to save £1.5bn a year.

It has taken on Aldi and Lidl with the introduction of ‘Exclusively at Tesco’, formerly known as Tesco Value, and 10,000 new own branded products, including its Farm Brands range. It also launched discount chain Jack’s. It has done all this without damaging its reputation for quality. 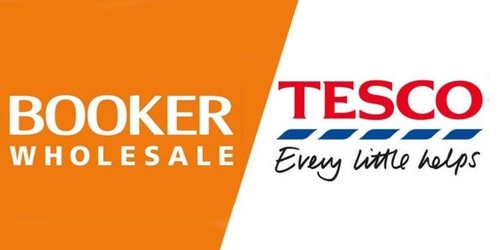 Analysts have compared Dave Lewis’s work at Tesco to turning around an oil tanker. It’s an apt simile and it’s worth remembering that with such a slow process, it’s not immediately apparent that it’s working. It takes faith, courage and determination to stick with the plan.

Admittedly, in retail and consumer, there are always new mountains to climb and new threats to face. It remains a highly competitive environment, Aldi and Lidl are opening new stores and Amazon is ramping up its Whole Foods business. Tesco’s share price is only slightly ahead of where it was when Lewis took over and the final quarter’s 1.7% like-for-like rise in sales looks less impressive when you take into account inflation.

But, that’s being churlish. Dave Lewis has earned the title of Mr Fixit and Tesco’s shareholders should just hope he doesn’t now look around for fresh challenges.